Photographing the Little Gulls and Kittiwakes was frustrating on Friday afternoon!
When the opportunity came the light would go, and later in the afternoon the light was in the wrong direction, I would be looking into the sun.
With a 1st winter plumage Kittiwake feeding as close as 2 feet I could never get it with the light behind or even to the side of me.
Why I was even there trying to get a shot at all was hopeless. The sea was too rough and the wind blowing hard. I was thinking about giving up when I saw, about 150 yards away a bird sat on the rocks; looking through my bins (now covered in rain and salt) revealed what I thought was a Skua. Got a little closer and confirmed when it turned, I glimpsed a pale collar. Bloody hell! plus a few other words describing my delight!! It was a Pom Skua ( a tick for my patch list.) Slowly moved closer and closer.
Dilemma, should I call it a day and appreciate what shots I have or go the dangerous route. I couldn`t give up that easy! moved around with the waves now breaking behind me, already been a little bit foolish earlier and was a little wet. I was able to get into the position I wanted. Took a few shots while I rocked with the wind then it took flight. And I never had a soaking! The day turned from a disaster one minute to a sucesess in minutes! 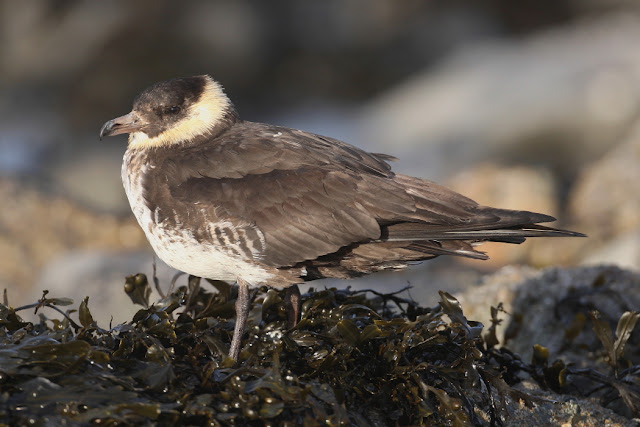 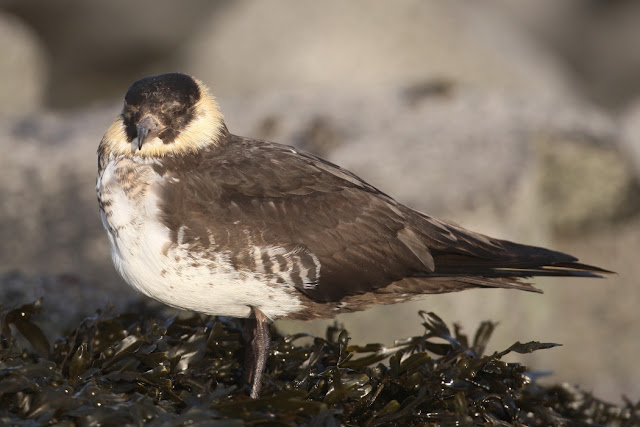 Next day, probably the same bird was seen in Somerset.
Posted by Steve Hinton at 13:47